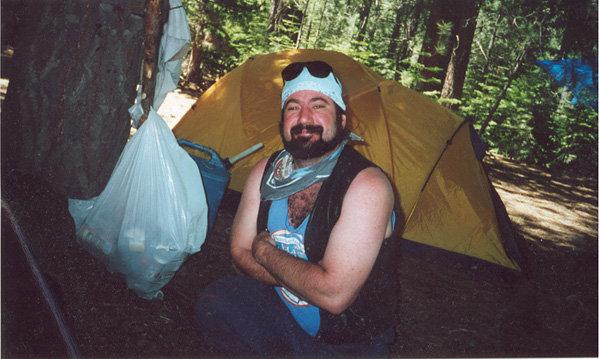 Daniel Patrick Wilson in the Land of the Free, May 2000

I'm sorry for your loss, David. That is a great picture you have of him from 2000.

Oh...David...I am so so sorry...he will be missed. Unfortunately I hadn't seen him since Pinel, but I loved reading his emails and chatting with him that way.

love that pic of Daniel:-)

So sorry for your loss, Nicole.

Sorry about your friend.

Thanks Ef he was my niece's uncle, but just like a brother to me.

He must have been well loved. My condolences to you and your family.

I am so sorry for your loss Dave. My heart goes out to you and your family.

I'm sure he's on top of the tower looking across all the mustard flowers and feeling the love us Pinelians remember him with. To Danny ... I love you. ... I'll see you on the hill someday

Thank you for the bear hugs, the guitar lessons, the "waves" and the love. You were the most real human being I've ever known, a lesson to us all to feel what we need to feel, to say what we need to say and to love through thick and thin.

So sorry. My thoughts are with you.

Sorry for your loss, Marla.

im sorry for your lost. you want me to bring you cookies

So sorry Kate he was so young , love to you and your family.

rest in peace... truly sorry kate.. to young to leave this earth.. Yes live each moment to the fullest..no matter what. Love through thick and thin is the best :) Hugs

I am so sorry to hear of your families' loss. What beautiful memories you've shared. Love to you all, Carol

thanks Hap and Dione XOXO

He was much younger than me and I don't remember him from Pinel, but his energy and spirit are missed nonetheless. Be good to yourself during this tender time. With love, Melanie

He was such a soaring spirit ~ loved him!!

Oh Kate, so sorry to hear. Thinking of you and all of Daniel's family.

Sorry for your loss Marla

Wow. Reminds us all how fleeting our lives are. Sounds like he was a special person. Hold on to those lovely memories. They are such gifts.

I'm so sorry for your loss, Kate. Thinking of you and all of Daniel's friends and family...

Thank you all for such kind words. This obviously came as quite a shock to all of us, but this was a man who had so much LIFE that it will carry on within us. Have a beer for him...smile...laugh and cherish the moments you have with the ones you love.

so much shock and grief...I so appreciate your supportive comments--thank you!

ooooh - another angel shining down on us. blessings, kari

Holy shit. So sorry to hear this. Such an epic being. Not only a person has passed - an era. Give BR my love.

a week ago yesterday my Dad died. Now I find out today Brynna's uncle Daniel - a truly epic being (and a young man) died. Why are all the giants leaving?

so sorry to read such sad news. it is always hard to loose your loved ones, but when they are young, it is even worse as there is a feeling of injustice, that they weren't given the opportunity to do it all...

We are all epic, though many don't know it yet. Maybe the great ones are leaving to push/inspire the rest of us into manifesting our own greatness?

aw... many hugs and lots of love to you hun. I feel for you.

Daniel really was a giant both in his personality and in physical size. Rest in peace Daniel.

Rest in peace Daniel. I'm sorry for your loss nikki.

I'm so sorry for your loss Brenna. I'll raise a glass to Daniel.

So Sorry to hear this. Please send Brynna our love. xoxo s

Daniel had suffered the last several years from Hemochromatosis - a rare disorder that causes excess iron to accumulate in the body. He had seemed to be on the mend, but the disease had stressed his internal organs, and Friday morning his heart burst.

I am imagining that there was too much love in his heart, and now it has spilled out as light and is everywhere. I am grateful that he is no longer in pain.

Our brothers were brothers.

I have so many memories of Danny - his silliness, his beautiful smile, the mischief in his eyes.

My arms are around you in a heartfelt embrace as my heart breaks for you and your family.

Please let us know if you plan a get together to honor his memory....

When I think of Danny the first thing I see is his smile. Heaven shine much brighter this day because of Danny’s presents. My prayers are with you and your family

In accordance with his wishes, Daniel will be buried in the cemetery in Juliaetta, Idaho, dressed in his leathers, and in a plain pine box. The burial will occur on Thursday, April 22 at Noon. There will be two memorial gatherings for Daniel in the near future, first in the Port Townsend, Washington area, and then later in the San Francisco Bay Area. I will announce exact details of the memorials as soon as they are decided on.

"Life is what happens to you while you're busy making other plans." -- John Lennon

David - you are in my and Marilyn's thoughts and prayers!

David, I am sad like everybody, but also happy knowing that he got to have you for a brother. Peace.

All my love being directed towards my wonderful, gentle, silly cousin Dan today as he is buried, according to his wishes, in his wife's hometown in Idaho. His grave might be there, but his spirit and light is much alive all around us

Kate Blum I'm wrapping my arms around you, John, Helga and Chris as you bury Dan today. Know that we're all there in our hearts and sending you so much love

I feel his spirit, his light, everywhere

yes...all my love to all of you

Dave and I are wishing your family many healthy memories and happiness today in your time of sorrow... much love and care!!! oooxoxo

thinking of Daniel with so much love as he is buried today...I feel his joyful spirit and energy everywhere...remembering times backpacking and camping in the sierras, feeling really connected to the earth, the trees, the rocks, the rivers, the animals...feeling the truth of life

With love, laughter, and tears, we returned Daniel’s body to the earth on Earth Day. It was raining hard all morning, and raining still when we began. The cemetery was muddy, but the rain ended before the service concluded, and then the sun came out and it was a brilliant, sunny afternoon. In addition to myself, Chris, and my mom and dad, some of Chris’ relatives from the town turned out in the rain, including her nephew “Little” Ed, who is a guy as big as Daniel was! (And I sure felt Daniel’s weight when we carried his pine-box casket to the grave.) Then who should show up, but our dear friend of 30 years, Tom Phipps, who had driven 6 hours from Helena, Montana, to be present. At noon, the Juliaetta town whistle, normally blown at that time for 20 seconds, was let to wail for a full 2 minutes in honor of Dan – For me that was the moment of greatest emotion. We played a recording of Jerry Garcia singing “The Teddy Bear’s Picnic” and then remembered Daniel with stories. It was left to me to read the lines “On Death” from Kahlil Gibran’s “The Prophet.” – A passage that Daniel always read at the funerals of those that he loved. After he was buried, we stopped in town at the Bottoms Up for a drink, and then back to Lewiston where my family and Phipps had many drinks in Daniel’s honor. Today is a new day, and we proceed in light and life.

Forgot to include this important Daniel detail... At the service conclusion, we lit off bottle rockets, and those who wished fired off Dan's shotgun. His wife Chris - who he had never been able to get to fire a gun - fired the last shot.

remembering Daniel singing and playing this song on his guitar...

SO incredibly beautiful, David. I so wish we had been there, but THANK YOU for sharing this

You would know the secret of death.

But how shall you find it unless you seek it in the heart of life?

The owl whose night-bound eyes are blind unto the day cannot unveil the mystery of light.... See More

If you would indeed behold the spirit of death, open your heart wide unto the body of life.

For life and death are one, even as the river and the sea are one.

In the depth of your hopes and desires lies your silent knowledge of the beyond;

And like seeds dreaming beneath the snow your heart dreams of spring.

Trust the dreams, for in them is hidden the gate to eternity.

Your fear of death is but the trembling of the shepherd when he stands before the king whose hand is to be laid upon him in honour.

Is the shepherd not joyful beneath his trembling, that he shall wear the mark of the king?

Yet is he not more mindful of his trembling?

For what is it to die but to stand naked in the wind and to melt into the sun?

And what is it to cease breathing, but to free the breath from its restless tides, that it may rise and expand and seek God unencumbered?

Only when you drink from the river of silence shall you indeed sing.

And when you have reached the mountain top, then you shall begin to climb.

And when the earth shall claim your limbs, then shall you truly dance.

ONE PICTURE OF OUR HOLIDAY WAVE

THIS IS WHAT LIFE IS ABOUT

MAY YOU ALL HAVE A GREAT YEAR